The Physiology and Biochemistry Society of Southern Africa held its first meeting in Johannesburg on 10 – 11 September 1971: 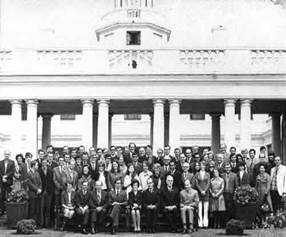 In 1974 the first joint meeting was held with the South African Pharmacology Society. An independent South African Biochemistry Society was founded in the same year, which started organising its own meetings from 1975.

The Physiology Society of Southern Africa (PSSA) continued to hold joint meetings with the South African Pharmacology Society till 1987.

The Physiologists who were the “leading lights” of the Society during these first 15 years of the Society’s history were, particularly:

They were joined during the 1980’s by

Up until 1985 the convenor of the next congress was always also the Chairman of the Society, a tradition that has been retained to the present by the annual appointment the joint position of “Convenor of the next Congress/Vice-President of the Society” (See the Council of the PSSA). In 1985 the first “President” to be elected for a 3 year term was Prof Peter Belonje (Department of Physiology, University of Cape Town).

The Wyndham Prize Competition for the best presentation by a young researcher at the Annual Congress of the PSSA was instituted in 1985 (and first awarded in 1986). This competition constitutes one of the highlights of the current PSSA congresses. It offers Physiology Departments in Southern Africa an opportunity to put the success of their post-graduate programmes on display, while also giving young researchers their first experience of presenting and defending their work in front of a supportive, but competitive, international audience. It also affords young researchers their first opportunity to compare, and discuss, their work with those of their peers at other universities.

The PSSA logo, adopted in 1990, was designed by Johan Koeslag. It depicts Michelangelo’s Adam receiving the spark of life from the Almighty in Africa. The symbolism is two fold: physiology is the study of that spark of life, and, for humanity, that spark was almost certainly conferred on the family, Hominidae, as well as on its only surviving species, Homo sapiens, in Africa, possibly Southern Africa.

The Physiologists who were and are the “leading lights” of the Society during the last 15 years of the Society’s history were, particularly:

Today the society has positioned itself as one of the key societies in the scientific landscape of South Africa. It embraces sister societies and associated activities, such as those of Biochemistry, Microscopy, Anatomy and Molecular biology.

Presidents of the Society